When the rules change...

Did you know Bristol used to have its own timezone, which was around ten minutes slower than the time in London? Until railroads connected the two cities and telegraph communications were introduced, the standardisation we’re now used to simply wasn’t required. Time was based on the highest point of the sun in a given location (natural noon) and as this took place at different times in Bristol and London, we had a local time difference up until 1880 when we ditched solar time for Greenwich Mean Time (GMT).

When the rules change, it’s often a good opportunity to call into question things we took for granted before.

Trains meant we needed better clocks, and better bridges and infrastructure and those innovations required investment. This was the ‘fintech’ of its day, in the nineteenth century, way before the term was officially coined.

I’ve spent this year – 2020 – launching my own FinTech business, Roqqett, in Bristol. I’m an engineer at heart, with significant experience in and understanding of finance and technology. It’s a passion for me. As I’ve been developing and rolling out this app, my team and I have been noticing and responding to the changes and opportunities this year and recent rule changes have presented to us. The rules in this case being the introduction of Open Banking in 2018 and also the impact of COVID on the way we pay and move money. The upshot of all of this has allowed us to create a new product, which we believe has the power to positively change the high street and upgrade the way we all manage our money.

I’m quite used to seeing rules change and the markets and sectors I work in having to adapt. And observing those who don’t adapt getting left way behind or – at worst – going under.

Technology is a key driver of the biggest changes we’ve seen over 25-30 yrs in finance, and reciprocally, finance has always been one of the key uses and applications of technology. For a time I was a trader in the FX markets, in the pit in Chicago. These trading floors were an institution: a rowdy and brightly coloured mass of people and hand signals and yelling. And then, in 2015, stock markets literally fell quiet as traders instead sat and tapped away in front of computer screens. Trading became purely digital. A tradition and an institution ended overnight, requiring any players in this market to adapt fast if they hadn’t already.

Like so many of my peers I had actually got out of banking soon after the 2008 crash After the crisis the regulatory rules had to change, and companies stopped trying to innovate because they were too tied up trying to deal with regulations. I’d worked inSingapore as well as Chicago and my world view has stood me in good stead as I’m fascinated by trends and markets, not just at home but worldwide. But no matter how aware we are, there’s no room for being complacent.

I’ve always been slightly obsessed with probability distribution and what happens in those key game-changing stock market events, sometimes christened ‘black swan events’, after a book by Nassim Taleb, the famous essayist, who was a currency option trader at the same time as me in the late 90s. And I think we’ve hit another of those key events right now, which many will look back on and see the opportunities retrospectively.

I’d like to shine a light on the opportunities that are here right now, in tech and banking and some of the changes we can make and take advantage of immediately.

As we know, new tech and new rules have made and broken entire industries and institutional iconic companies over the last few years. Kodak is a clear example: as digital photography took the lead, Kodak was no longer the leader, in fact they ceased even to be a player in the photography market and went bankrupt having been dominant.

Blockbuster Video missed a huge opportunity when Netflix came knocking on their door, not once but twice: firstly through DVDs sent by post, then by online streaming. They didn’t anticipate or adapt to the clear change coming their way. And it’s not just tech that causes these changes. United Airlines is another one, completely disrupted by Southwest Airlines… like Ryanair to us over here, a change in business model that affected the whole industry.

This is about to happen to the payments and banking industry if key players don’t notice the disruption, the opportunities and the simple but vital shifts we need to make to adapt to what businesses and consumers need now, in 2020 and beyond.

The Innovator’s Dilemma by Clayton Christensen is one of my fav books of all time. In it Christensen explains that established companies create solutions for demanding customers and they become very focused on doing this very very well. It’s their job, to deliver efficiently and they do so but, as they focus on this then they become limited and not able to take on disruptive tech and new opportunities, because they’re so busy focussing on doing this one thing. Inevitably brand new companies come in with a lower cost and an innovative offer, tempting the customers across too.

In the payments and banking world, what we think of as very current, new banks, such as Monzo simply could not exist if all those other established businesses and technologies weren’t there in the first place. These kinds of challenger banks are showing what’s possible and at Roqqett we want to take this a step or two further, without even requiring our customers to switch banks.

The regulatory changes around Open Banking, combined with the abandonment of cash, caused by the pandemic mean we need a better way to make and take payments – a solution that is easier for consumers and affordable for businesses who are held hostage by unavoidable high fees. 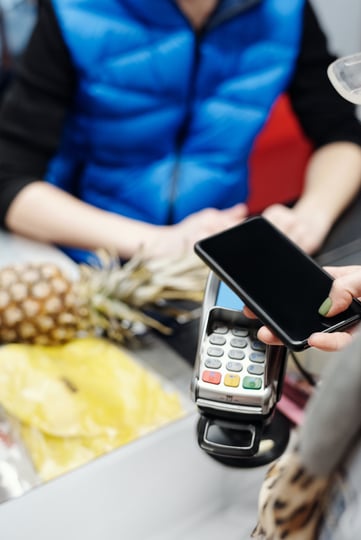 Open Banking is about safely and legitimately unlocking some of the data held by banks. Most of it is not shareable because it’s confidential, but banks have not focussed on what they can do with that data. Banks have finally, because of the new regs, been able to open this up and create a set of APIs.

APIs are otherwise known as Application Programming Interfaces. But what does that mean? APIs let applications talk to each other and share data. If a company wants to display tweets on its website, it can do so using the Twitter API. If a software developer wants to build your calendar into a meeting organisation app for instance, they could access your Google Calendar via the Google Calendar API. So in this case regulated startups can request information from your bank such as your transaction history. Before a company can access data via an API, it needs to be permissioned to do so by the owner of the data.

So what are the opportunities here?

Digital and mobile banking take-up has been hugely accelerated by COVID. And as the new innovator on the block, we’d love for you to download Roqqett and tell us what you think. We’re currently looking for feedback on our new innovation. It’s very secure, encrypted and fully regulated by the FCA

In summary we’re going to be offering:

And, this is why we think Bristol may still be in a different time-zone to London, as it was before the invention of the Great Western Railway, but now it’s not ten minutes behind but (we think) several years ahead with a FinTech company fit for the present and future.

Going Cashless: How to make the move and what are the benefits for your business?

Understand and reduce card fees. A buyer's guide for merchants

The Merchant Service Charge (MSC) is both the largest and most commonly overcharged card processing...

Us Brits are well-known for our dedication to queues. If reputation is to be believed, we’re the...